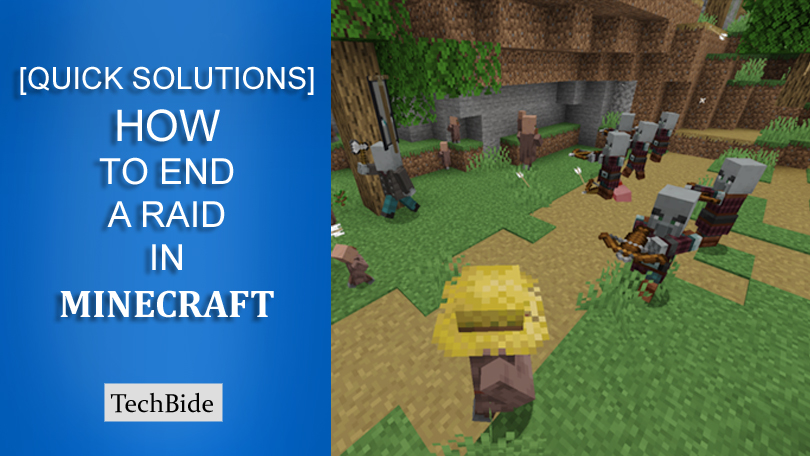 Are you stuck and get bored? Do you want to end a raid in Minecraft Quickly? Well, for this, you must have to try the following proven tips that will definitely help you to get rid of this difficulty. Every gamer wants to take his game to the next level without any hassles.

But you know what?

The game developers are trying to annoy us by playing our minds.

They set barriers at various points to test our patience. Like raids in Minecraft; If you don’t stop them immediately, they will attack all nearby players, iron golems, villagers, and wandering traders, and they also come in groups that make them even more vulnerable.

Quick Solutions to End a Raid in Minecraft

So before they attack and destroy everything, I am going to tell you quickly the three best solutions to end a raid in Minecraft quickly.

Now Hardly!, if you are already in the position of a raid, then it is very tough to end a raid in Minecraft. A lot of food, Armor, and weapons are needed to compete with them.

You will need to stop it by destroying all of the enemies that come in waves, but if you feel the raid is too hard, end it quickly with a command so you can return your village to normal.

Solution2: End a Raid in Minecraft with Commands

Now, on the other hand, you need to set your game mode to peaceful. Difficulty can be changed in the settings or do “/difficulty peaceful” command. This will de-spawn the Mobs.

Essentially it will end the wave. The game difficulty can be changed again once you have removed the Bad Omen effect

Now when you look in the settings menu again, you’ll find that the difficulty level has been adjusted based on your console command parameter which you have entered.

The best way to end raid is to turn them off entirely in Minecraft. And you can do this with just putting a command  /gamerule disableRaids true. This command required cheats enabled.

This will absolutely end the current raid and will stop any more from happening again. Open to LAN and allow cheats if you are on a survival single-player mode.

But wait, let me tell you something, Outside of opening your game to the LAN and enabling cheats every time you need to restart the game to make any changes you want. You will not be able to adjust the difficulty level.

When the raid is over, the Hero of the Village status effect will be given to the player, giving them a discount on trades, but this effect will be removed by drinking milk like all other effects and waves.

How many waves are in a raid?

The number of waves depends on the difficulty mode which you’ve selected. There are 3 waves in easy mode, 5 in normal, and 7 in a hard mode. Difficulty in high range will increase the health bar of the wave.

In the above article, you see we showed you the most useful and relevant solutions to end a raid in Minecraft. Minecraft gamers are often facing errors and difficulties in their game like Minecraft Shaders, Increase Tick speed, and other Errors, So if you further have any questions, then comment us below. After a deep analysis of the above issue, now our team has the potential to fix every problem related to Minecraft.

Isla has been working in Techbide as an English Editor, Copywriter for more than 1 year. Her articles mainly cover the fields of how-to tutorials, including error codes and mobile issues. Isla likes to make a drawing, and she’s a huge music fan.