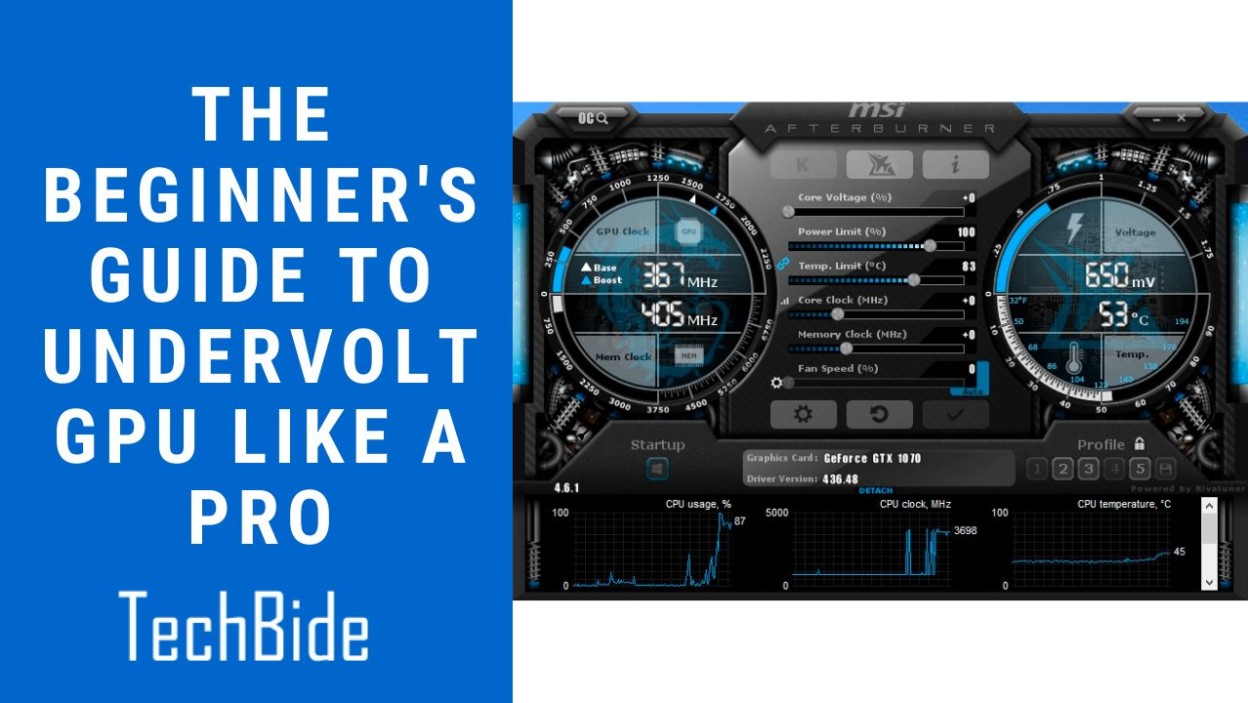 The Beginner’s Guide to Undervolt GPU Like A Pro

You might want to learn how to undervolt a GPU if you have one of the most outstanding graphics cards currently available or an older one that needs a refresh. It can minimize power demands, lower temperature, and noise levels, and even improve performance in some situations.

Undervolting necessitates some fundamental knowledge, but it is a simple process if you know what to do. Continue reading to learn everything you need to know about undervolting your graphics card.

How Would Undervolting Offer Improved Performance?

Graphics cards are among the most advanced forms of hardware widely available. GPU Turbo is a feature integrated into your Nvidia GPU. If the thermal efficiency is stable and the TDP allows it, the GPU can overclock itself for better performance. As the temperature goes up, your GPU’s central frequency will drop to promote stable heat dissipation.

The issue would be that this process must be carried out steadily instead of at a high temperature. That implies that a card that reaches 80 degrees Celsius will perform slightly worse than one that reaches 70 ° C in a game.

Undervolting Software That Is Required.

Each piece of software included below is available for free. You will need the following apps to achieve a reliable undervolt on your Nvidia GPU:

That is all there is! Great! To get this ball rolling.

What We Will Be Monitoring Using HWiNFO?

We have to keep an eye on several things in HWiNFO to see if what we are doing works and how well it works. (we will start HWiNFO in sensor mode)

We use HWiNFO as it shows us the information in four proper columns: current, minimum values, maximum values, and average values.

How Would We Maintain Track of These Things?

Keep a keen watch on the items I listed in HWiNFO using your favourite spreadsheet software (probably Google Sheets or Excel).

This is how mine looks:

Steps 2, 3, and 4 should be repeated. Rep until you see artefacts on the screen or get a BSOD.Increase the voltage by 25mV once you have encountered several issues (or reduce de undervolt by 25mW, however you want to word this)

Steps 2, 3, and 4 should be repeated.  If everything appears in order and satisfied with the findings, try a different benchmark (I like to combine 3D Mark Time Spy with Unigine Heaven). Play for at least 30 minutes with some games.

Congrats! Your GPU has just been undervolted!

How to Undervolt a GPU – the Real Deal Did you ever make it this far? Excellent! We will get to the Undervolting immediately! Let us get this party started!

Why? We will get this value to ensure that we will not lower the GPU’s central frequency when Undervolting. As you will see, my GTX 1050 Ti increased itself much more than the claimed Boost clock after just launching Unigine Heaven:

The GTX 1050 Ti is not a beast by any means. It should be able to keep those clocks running for a long time without any severe temperature issues. On the other hand, a more powerful card may reduce them over time as it heats up. That is precisely what we are attempting to avoid.

Finally, MSI Afterburner! We are going to do a little undervolting!

MSI Afterburner is a powerful programme, but it can be challenging to use at first. No need to be concerned!

To bring up the voltage frequency curve, press CTRL+F after starting Afterburner. Assume we want to set the GPU voltage to 950mV maximum (as opposed to 1.050V in my case if you check the screenshot above from HWiNFO).

At that voltage, Afterburner displays to us what frequency our GPU will operate at. So the frequency is 1683 MHz. As I predicted, it will be far lower than my aim of 1809 MHz

To fix this, return to Afterburner’s main window and increase the core clock till the figure from 950 mV meets our needs. In my scenario, I require a frequency of 1809 MHz

I have increased the Core Clock to meet my desired frequency, as you can see in the image above. Then press the apply button. Re-adjust and re-apply if the frequencies vary slightly.

So, now that we have established our desired maximum boost frequency at 950 mV, we need to execute the following to ensure that our GPU does not exceed 950 mV and that the frequency remains stable:

To fix the voltage, press L.

Drag any voltage points more than 950 mV (to the right of the locked point) to your frequency or below it (in my case, 1809 MHz).

Everything will be tuned to the same frequency as our locked voltage once you hit apply in Afterburner’s main window.

Unlock the voltage by pressing L.

Drag any voltage points above 950 mV (to the right of the locked point) to or below your frequency (in my case, 1809 MHz).

When you press apply in the main window of Afterburner, everything will be set to the same frequency as our locked voltage.

To unlock the voltage, press L. If you forget to do this, your card will be locked at this voltage. This is not what we want because our card will get lower than this when we are idle.

Moreover, here are some photos of me performing the five steps listed above:

You have just undervolted your GPU after hitting the last apply button in the preceding steps. Congrats!

As previously indicated, you must now benchmark and record the temperatures and other data.

Furthermore, I cannot emphasize this enough: test, benchmark, and play! Make sure your settings are in good working order.

In my opinion, when you have completed at least three benchmarks in one application, three in another, and played a game for at least one hour. This is to ensure that your video card is in good working order. Furthermore, before you ask, the answer is yes! You can make some versions of 3D Mark Time Spy run without issues, but they will fail or BSOD in another benchmark or game. It is just the way things are.

As you will see, I have lowered my temperature by a couple of degrees. Then I went ahead and overclocked, and in all six runs of these two benchmarks, I obtained an 8% boost. So I was able to get the GTX 1050 Ti to run about 2 degrees cooler while also improving performance by 8%. For no cost!