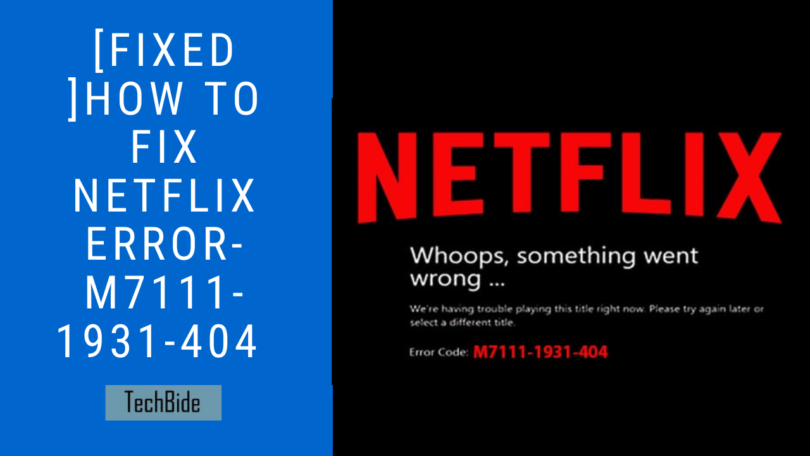 Millions of people in today’s age, get stuck to their screens while enjoying the streaming of Netflix. You might agree with me; People are not getting so much violence over the economy’s down as they are frustrated when Netflix streaming is down.

You are enjoying the digital streaming of your favorite plays and suddenly an annoying message gets to appear on the screen.

Well, by examining various scenarios we concluded that what are some main causes that could be behind this issue. So we have compiled a list of potential points that might be triggering the glitch. Let’s head over to the list.

A clear reason could be that the VeeHD Browser extension might be interfering with the streaming of Netflix – In Chrome, there lies a certain extension that is known to cause problems with Netflix’s streaming service. So, if you have the VeeHD extension, the fix might be as simple as uninstalling it.

Want to know the best part?

A lot of users encountering this particular error have reported that the issue was fixed after they removed the Adblock extension from their computer.

Apart from it, Side loaded extension could create this error – There are several Netflix extensions (that can only be sideloaded) that are no longer working after a recent update.

Many users have found the VeeHD shown to conflict with Netflix. If you have this certain extension, this is most likely the reason why you are receiving the m7111-1931-404 error code when you’re trying to watch.

Are you very fond of using Adblock? Don’t need to remove it completely. It’s just enough to disable the extension before you are planning to watch a Netflix show.

Once you have uninstalled the extension, restart your browser and see if this issue has been resolved.

There are various extensions for Netflix that can only be sideloaded. But one of the most famous extensions I have listed here that forces Netflix to play any video at 1080p with the 5.1 sound.

Keep in mind, though some of these extensions discussed here are considered to be policy violations by Netflix. And the recent Netflix update, that has broken the vast majority of Netflix extensions that were sideloaded for the reason. So, if you have the extensions mentioned or a similar one. You’ll have to remove it in order to fix Netflix.

Several users who are facing similar situations have been reported that the issue was fixed after they removed the sideloaded extension and had restarted Google Chrome. You should do the same.

If this fix still didn’t resolve the issue, move down to the next and last method listed below.

The Netflix error m7111-1931-404 is also reported by many users in specific situations where the Netflix streaming services were down in their area. These types of cases are extremely rare. since you’ve caught up with this far without any result. It is worth a try.

It is a perfect time for having any guess about the real issue is their Twitter account, so head over and read what’s going on there. This will provide you with some good insights as they don’t have any relevant information usually updated on their site.

Tabbasum is working as a tech writer at Techbide since she was graduated from university with a strong writing portfolio. Love to guide readers to fix computer troubleshoot problems, mobile app errors, and have a great portfolio in writing how-to guides. She quotes that it makes me happy when users quickly solve their PC, mobile, and other devices problems. In her free time, you might catch her watching BBC documentaries.