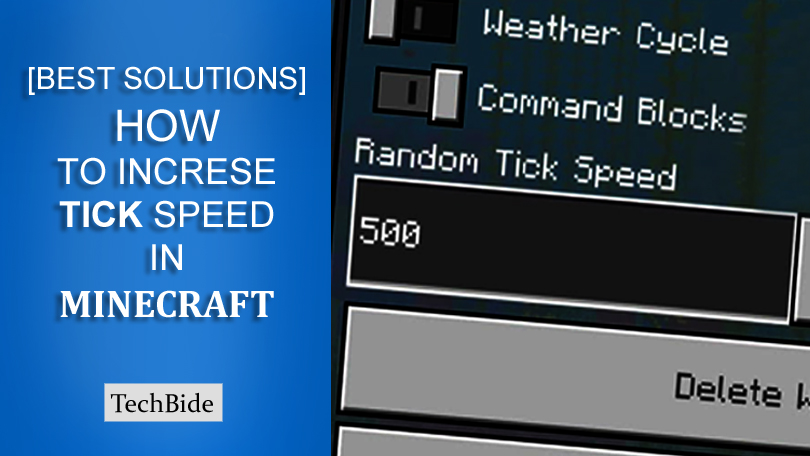 Are you tired and worried about slow tick speed in Minecraft? Well, no need to be worried because we’re here to give you some best solutions to Increase Tick speed.

Today in this era of high-speed technology, everyone is in a hurry. No one has time to wait for results, Similarly, gamers also want to solve their problems as soon as possible. For that reason,  we are going to show you quickly the best solution to increase tick speed in Minecraft.

But wait! Before we find out some quick solutions, let me explain to you a little bit about the tick.

Minecraft always promotes every gameplay based on a unit of time called a game tick. In each second, there are 20 game ticks, which indicates one game tick happens every 0.05 seconds in real life.

How to Increase Tick speed in Minecraft?

To change on Pocket Edition (PE), tap on the “chat button” at the top of the screen.

To change on Xbox One, press the “D-Pad (right)” on the controller.

To change on your Computer, press the “T key” to open the chat window.

To change on Nintendo Switch, press the “right arrow button” on the controller.

You need to enable cheats to use the command. Once the cheats are allowed, you can increase tick speed.

you need to type, /gamerule randomTickSpeed 50

You can put any number in by the 50 till 255. it’s up to you to increase as much as you want and decrease and able to down it at your convenience.

Entering the value to zero disables random ticks altogether. But as a consequence, increasing the speed results cause decay and growth both faster, and plants might decay quickly if the value is set too high.

However, If the computer is not able to keep up with this speed, there are several game ticks per second (TPS). As the large majority of actions are timed based on tick calculation rather than on wall clock time, this means that many things take longer on a slower computer.

On each tick, certain features of the game advance a little bit; moving objects change position, mobs check their surroundings and update their action, health and hunger are affected by the player’s circumstances, and much more.

All of this appears on the game’s server, the role of the program that handles game logic (even in singleplayer mode). As a consequence, things the consumer does, such as drawing graphics, do not change the tick rate no matter how slow or fast it runs.

You might be wondering! Most Gamers ignores random tick, but some are using it to do something;

In the future, some blocks can request a tick sometime. For things that have to happen in a predictable pattern, Minecraft uses scheduled-tick. Minecraft Redstone repeaters schedule a tick to change state, and water schedules a tick when it needs to move.

While a part of a game tick, every block position that has requested a scheduled tick get ticked on a specific game tick. The highest number of scheduled ticks per game is 65 to 536.

A Redstone tick represents two-game ticks and creates a 1⁄10 of a second pause in the signal of a Redstone circuit; that is, the signal’s time to travel from a location A to location B increased by 0.1 seconds.

A tick concerns only to the increase in signal time. In the setting of Redstone, “tick” almost always refers to Redstone ticks. A Redstone repeater has a pause of 1-4 Redstone ticks. The default pause is 1 Redstone tick, and pressing use item on the repeater increases it, visually indicated by the slider moving down the block.

Redstone tick is not “an authentic” thing in java edition, but a term created by the community to make Redstone easier since most Redstone elements have delays of multiples of 2 game ticks.

In this article, I explained to you the most helpful solution to increase tick speed. Minecraft gamers are often encountering errors and difficulties like Ending a Raid, installing Shaders, and the best part is that all these annoying errors can be fixed with one click. So if you have further any questions, comment below to let us know your valuable opinion.